Macetown is a historical gold mining settlement in the Arrow Gorge, situated far up in the Mountain.  The access can be found in Arrowtown by the car park which is close to the Chinese village.

This settlement can be reached by foot, bicycle, and Motocross bike or 4wd vehicle. The road crosses 22 times the Arrow River and creeks on a distance of 15km. Over the past few years the road has not been maintained on some sections so the road is very rough with deep drive ways. The most river crossings are by the first 3 km’s drive ways of the 4WD vehicle. The water could be 1/2m deep and the underground is very loose so be careful if you cross the river with your bike and check the tire pressure first before driving through the water. I drove beside the drive way and the water was much shallow and the only difficulty was the hidden big rocks along the waterline. I drove slowly and then increased the speed by driving out of the water. It is safer to stand than to drive seated. This is due to the fact that in a standing position, the bike can be much better controlled and balanced if you slip. This is just in case you come off the bike by the river crossing. It is much easier to balance the bike if the engine happened to turn off.

On the way back to Arrowtown the sun stood behind us and the river was like a mirror. There was nothing to see what was hidden under the waterline. The only way to find out was to get off the bike and walk through the river to find a good line to pass. At some parts close to the end of the river side, the water was around 21 inch deep although we have had no rain for around 3 weeks. Before going up the mountain, I advise to check the river current if the rain drop in the river rises rapidly then a crossing could be impossible than before.

History of Macetown is dating back to 1862 when William Fox discovered gold for the first time in the Arrow River. In a very short of time the population of the little township grow up to 1500 miners at the junction of 12 mile creek. By 1865 most of the gold was excavated by the miners and the population shrunk rapidity.

At the early 1900 the town was deserted, only a few original building are restored and one of them is the Baker house. This is the first building visible of the historic Macetown. Department of Conversation has successfully restored those buildings over the past few years.

Macetown had a small Chinese community, which was based by the end of the main street in the area known as Chinatown. The Chinese miners kept up the Chinese tradition and celebrated all annual events such as Chinese New Year and moon light festival.

My verdict of this trip is highly recommended for Motorbikes up to 650 ccm, with a huge fun factor, I have not been such exhausted before for a long time after this trip. At the end, after 44 river crossings I just dropped my bike to the side then switched off my engine although the back wheel still in the water. I lifted my arms and shouted I made it safe and dry! it was such a great day! Once more I had experienced in the most amazing part of the world in the rural untouched back yard of Southland 🙂 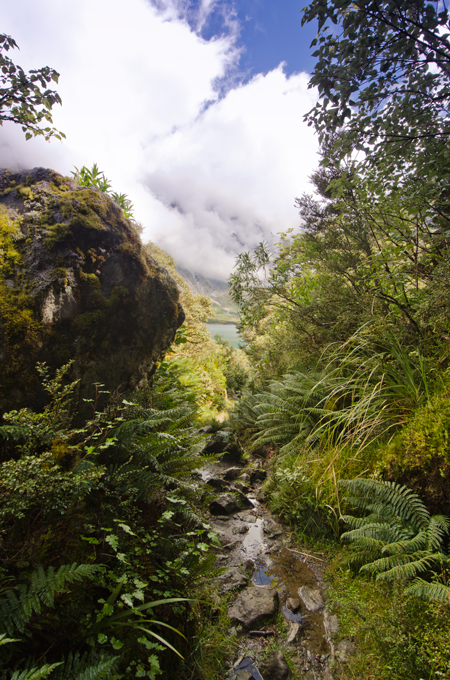 Lake Marian is a lake in the Darran Mountains in the hart of Fiordland National Park in the South of New Zealand.

If you have no transport option from Te Anau www.tracknet.co.nz is the best choice to get to the car park at the entrance to Hollyford Valley. From there it take a 1.5h walk to the lake, after around 20 minutes walk you get the first glimpse of the Marian Creek which is a good oportunity for a short photo stop.  From there on the track is well marked and sometimes you have to pass gravel pits. The tramping track is not very challenging, in dry conditions, after heavy rain it get very dirty on some section of the track just before you get out of the forest.

If you like camping in the nature this is the best lace to be.

Portfolio of the Photographer Frank Widmer